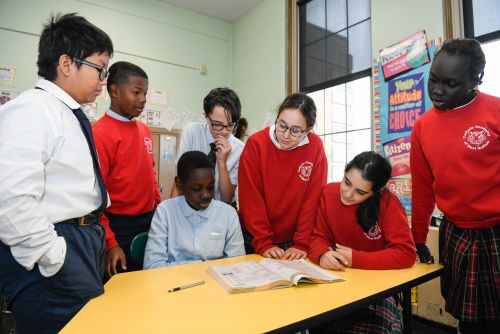 My name is Mrs. Maruscak.  Sixth grade is certainly an exciting time in a young person’s life. I want to work with you to make sixth-grader’s experience as meaningful and memorable as possible. Throughout this school year, your child will look to you for support and guidance as you and I work together as a team to help your child be successful.

This year, students will be switching classes for Math and Science. Ms. Moore will be teaching Math and I will be teaching Science.
There will be opportunities for you, as parents, to become involved in your child’s education at school and at home. If there are ever any comments or concerns, please feel free to contact me at school (885-6111) or by e-mail (emaruscak@cawb.org) I look forward to working with each and every student this year. It is my personal goal to make the 2019-2020 school year the best yet!

For the month of March the Sixth graders will be learning the following:

English\Language Arts\Writing:  Students will be working on several comprehension skills and strategies which will include: citing evidence from text, determining the meaning of words and phrases as they are used in a text, including figurative, connotative, and technical meanings,  engaging effectively in a range of collaborative discussions (one-on-one, in groups, and teacher led) building on others’ ideas and expressing their own clearly, and practicing summarizing from text, determining an author’s point of view or purpose in a text and explain how it is conveyed in the text.  The Sixth Graders will be completing their novel study, Bud, Not Buddy, by Christopher Paul Curtis and beginning their last novel for the year, Brian’s Winter, by Gary Paulsen.  We will be using Mentor Sentences which will be practiced on a daily basis to improve grammar usage and the quality of writing.

Science:  Students have been introduced to the theory of plate tectonics, which states that Earth’s lithosphere is made of large pieces, called tectonic plates.  These plates are in constant motion as a result of density differences caused by the transfer of energy as heat inside the Earth. Next, they will learn that there are three types of plate boundaries, as well as possible causes for the movement of tectonic plates.

Math:  For the month of March, the sixth graders will begin Module 4, which focuses heavily on vocabulary associated with the four operations exponents.  This will lead into their first introduction to solving equations.  I continue to stress the importance of practicing basic facts, as they are so important for every unit in 6th grade!  The 6th graders have access to XtraMath for basic fact practice and are encouraged to work on IXL outside of school.

Social Studies:  Students continue their unit of study on Ancient Rome. Through informational texts and videos, the sixth graders will learn that Rome began as a group of villages along Italy’s Tiber River.  Around 750 BC, the villages joined together to form the city we know as Rome.  It was ruled by kings for more than 200 years.  Eventually, Rome became a republic and the people elected representatives, which then formed the Senate.  This was Rome’s most powerful body of government.  The Roman Republic and its army grew and Rome conquered new lands beyond the Italian Peninsula.  Once Julius Caesar became Rome’s dictator, it brought Rome’s republican government to an end.  Students will understand that in 27 BC Rome became an empire.  With this empire came the religion of Christianity that spread from the Middle East into the eastern half of the Roman Empire.  By the third century AD, Christianity had spread throughout the empire.

Religion: For the month of March, the sixth graders will focus on the importance of Lent.  They will learn that Lent is a time of prayer, sacrifice, and good works that prepare us to greet the risen Lord on Easter. Lastly, we will identify scripture readings for Sundays in the liturgical year and trace the life of Christ through these weekly readings.

Not only will these skills and strategies be used within our reading series, they will also be incorporated into the other core academic subjects.

Grammar Concepts: including nouns, pronouns, verbs, sentence structure, tenses, adverbs, adjectives, plurals, possessives, prepositions, punctuation, capitalization, etc. will be practiced on a daily basis to continually improve the quality of writing. Journal Writing is also practiced on a daily basis to enable students to freely write and avoid writers block. Weekly Writing – Students will write for an audience on a weekly basis, utilizing all steps of the writing process.

The Sixth Grade class will be completing novel studies on the following titles: The Lion, the Witch, and the Wardrobe, by C.S. Lewis, and Freak the Mighty, by Rodman Philbrick.

Social Studies: Sixth Grade students will be learning about Early River Civilizations during the first half of the school year. These include Mesopotamia, Ancient Egypt, the Indus River Valley, and Ancient Egypt. The countries of Ancient Greece and Rome will also be covered. Students will study their geographic features, climate, government, arts/entertainment and architecture. During the second half of the school year we will cover the Spread of Islam, Middle Ages and the Renaissance, Reformation/Age of Exploration, and the Industrial Revolution.

*For each of these countries/concepts, students will be involved in “hands-on” projects to show their understanding through creativity.

Science: Sixth Grade students will be studying Earth Science. Specific topics that will be covered are the following:*Scientific Method/ Lab Safety*Daily, Monthly, and Seasonal Changes on Earth*Erosion/Weathering*Rock Formation/Mineral Testing/ Rock Cycle*Weather and Climate*Students participate in a “hands-on” science lab once a week, testing various theories and hypotheses.*Sixth Graders participate along with the Eighth Graders in the Science Fair, which is held in the school gym every year. Each student will design their own experiment, test it and then present their findings to other classmates and the school community.

Religion: The Sixth Grade will focus on the Old Testament this year. Specific topics and concepts include the following:*Ancestors of Faith- Abraham, Isaac, Jacob, Moses, and Samuel*The structure of the Bible *God’s Call and Promise*God’s Covenant with Moses and the Israelites*Judges, Kings and Prophets*Contemporary Challenges*Self-Respect and Conscience

Math: Sixth Grade students will be working with the following mathematical concepts:*Number Sense and Operations*Algebra*Statistics*Geometry*Probability

PARENTS CAN KEEP UP TO DATE WITH THEIR CHILD'S PROGRESS THROUGH THE PARENT PORTAL AVAILABLE AT ESCHOOL DATA. THE PORTAL IS AVAILABLE THROUGH THE FOLLOWING LINK: